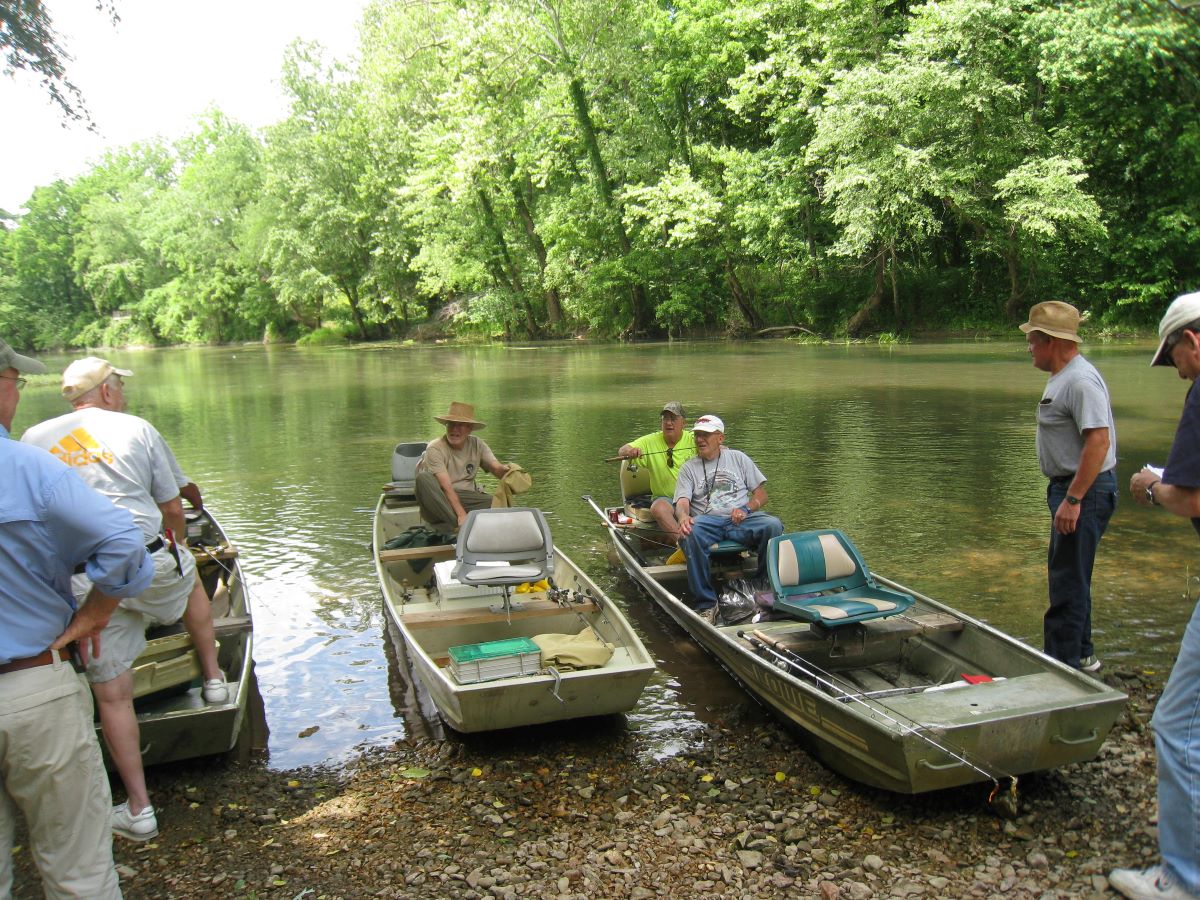 In a galaxy far away, when I was in my 40s, I would fish with my son, my brother, and friends on the Big Piney River in east central Missouri. This was not a glam-intensive fishing experience with guides in $250 Orvis and Patagonia outfits and a 5-star lodge featuring rib eye steaks with red-wine reduction sauce. Think more the Tarry Inn in downtown Licking, MO, population 1800 (3600 now that they have the South-Central MO Correctional Center) and the Sonic Drive-In in nearby Houston. Our guides on the Big Piney were the Claytons, a family of farmers and winter-time logging truck drivers, or whatever else it took to put bread on the table. They were “good ol’ boys,” the highest accolade available in rural Missouri. Ray Dow “Ray” Clayton, the patriarch, was solid as an oak door, had a crew cut and wore zippered, faded blue Walmart jumpsuit overalls open at the chest. At one time he had been the sheriff of Texas County.

We would drift down the river in two 18-foot Jon boats, two paying cargo up front, each on a bench seat, and a guide aft, with a paddle and, if in operating condition, a much-abused electric motor. Tree-shrouded bluffs loomed hundreds of feet above us as we passed over rapids and deep runs, water so clear we could see the Fall leaves coating the pebbled bottom like Mexican tiles. The objects of our interest were the rowdy, bronze-backed smallmouth bass, as well as a motley collection of less respectable fish – bluegill, rock bass and warmouth. These panfish, however, were considered by local folks to be the best eating.

As the morning wore on, Ray, Ramon, or Tom, whichever two of the Claytons were guiding, would attach fish after fish to metal stringers clipped to the sides of their boats. Around noon, they would beach the boat on a shoal and the shore lunch ritual would commence. One guide would reach for a gunny sack stashed under his seat, pile it atop a battered, metal cooler and step ashore. He was the chef de cuisine. The other guide was charged with food prep. He would sit in the sand, feet out in the water, take a sharp Barlow folding knife out of his pocket, and one by one gut each fish with two deft cuts. He would then cradle the palm-sized panfish in a callused hand and scale them, sluicing out the body cavity in the stream. River otters, raccoons and mink provided clean-up service.

Meantime, the chef de cuisine had pulled a battle-scarred kerosene Coleman stove and a large fry pan out of the gunny sack. He would set the stove on the pebbled shoal, squatting, and fire it up. From the cooler came:  a gallon can of vegetable oil; a plastic bag filled with a breading of flour, corn meal, and salt and pepper; a bag of potatoes; four or five large yellow onions; and a loaf of Sunbeam bread like we used to soak with water, ball up, and throw at friends in the elementary school cafeteria. 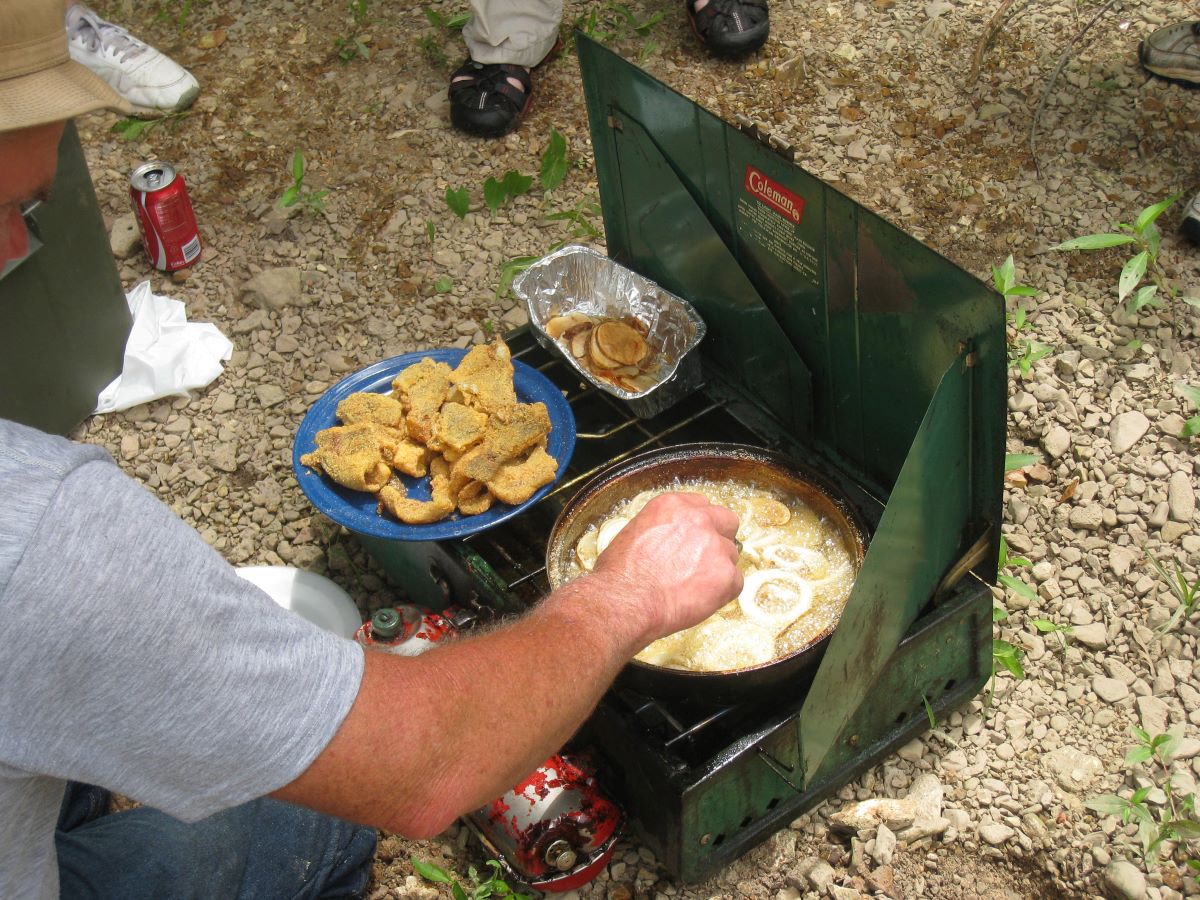 The breaded panfish would brown in the fry pan, hot oil snapping and crackling, as we waited, beers in hand, like dogs hovering around a kitchen table. The prep man would busily slice up potatoes and the onions. When the fish were done, draining on a brown paper bag, the potatoes and onions followed into the fry pan. On one of our earliest trips, a fisherman looked around and asked, “Where are the plates?” The chef responded, “Over there,” and pointed to the loaf of Sunbeam bread. Big Piney etiquette required that you plop a fried fish, together with a slice of onion and a slice of potato, on a piece of bread and pick from there, with your fingers. There was an occasional “ouch” when a particularly delectable morsel proved too hot. On his first trip, a newbie started to nosh his piece of bread. Ray exclaimed, “He’s eatin’ his plate!” Some things are just not done up the Big Piney.

If life were particularly good that day, one of us might have brought along a bag of double-stuffed Oreos. Oreos, of course, are best paired with a cold Budweiser. The cumulative effect of fried fish, potatoes, onions, double-stuffed Oreos, and a beer is a gratifying sense of well-being coupled with the vitality of a slug. This leads to an after-lunch meditative experience best enjoyed in the shade while the guides clean up, scouring the fry pan in the gravel and returning the Coleman stove to its home in the gunny sack.

Drifting down the Big Piney in the late afternoon, approaching the take-out point, some of us would be thinking about dinner. Maybe a stop at the Sonic Drive-In in Houston, 20 minutes south of Licking. Maybe a SuperSONIC Bacon Double Cheeseburger paired with an Oreo Peanut Butter Shake or an Oreo Cheesecake Shake. We wonder, did the Walgreens in Houston carry Pepto Bismol?

← What’s On Your bookshelf?
Of burgers, zits and unrequited love →